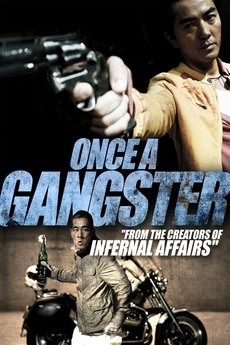 Once a Gangster
JustWatch

Roast Pork joins the triad as a young man and ends up becoming a trusted lieutenant of boss Kerosene. However, his true passion is in his successful chain of restaurants, his loving wife, and his two children. So when Kerosene wants to promote his trusted right hand man to the top of the organization as a way to take on his financial debts, it's understandable why Roast Pork would want to refuse. Roast Pork comes up with an intricate scheme with his men that would take himself out of the running, but Kerosene's intervention causes it to fail. When all hopes appears to be lost, lifelong gangster Sparrow is released from jail after serving a 20-year sentence for committing a gang-related murder that earned him a guarantee for the leader spot. However, Sparrow has made his own plans to stay out of the gang, setting off a battle of wits between the two men.