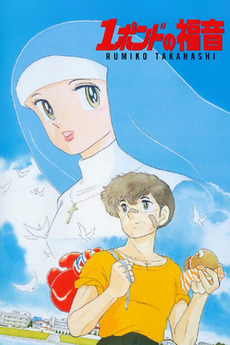 A young idealistic nun helps a gluttonous young boxer gain the self control he needs to train to become a champion.

Hatanaka Kosaku is a young boxer who has a major flaw, he can't stop eating. That weakness puts him into into heavier weight classes that put him against stronger boxers and even worse, he's prone to throw up when he gets a body blow, which drives potential opponents away. His coach is at his wit's end as he struggles to get this idiot to show some discipline in his training. The matter is complicated when a young nun feeds the "starving" boy after she finds him fainted on the streets during his enforced fast. She learns of her mistake and she tries to help him get ready for a fight, but his weakness for food and the odd relationship they share don't makes things easy.

Unrestricted, just anything Japanese you can find on Letterboxd (including shorts, limited series and documentaries), updated constantly. Reverse chronological order.…