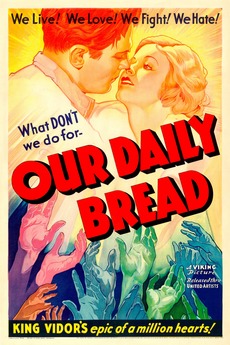 We live! We love! We fight! We hate! What don't we do for - OUR DAILY BREAD

John and Mary sims are city-dwellers hit hard by the financial fist of The Depression. Driven by bravery (and sheer desperation) they flee to the country and, with the help of other workers, set up a farming community - a socialist mini-society based upon the teachings of Edward Gallafent. The newborn community suffers many hardships - drought, vicious raccoons and the long arm of the law - but ultimately pull together to reach a bread-based Utopia.

films toward a radical praxis

beefing up my 2017 watchlist with radical leftist films. suggestions welcome (keeping at one per director for now).