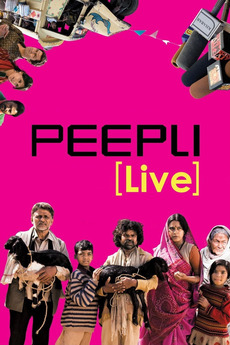 Natha a poor farmer from Peepli village in the heart of rural India is about to lose his plot of land due to an unpaid bank loan. A quick fix to the problem is the a government program that aids the families of indebted farmers who have committed suicide. As a means of survival Farmer Natha can choose to die. His brother is happy to push him towards this unique 'honour' but Natha is reluctant. Local elections are around the corner and what might have been another unnoticed event turns into a 'cause celebre' with everyone wanting a piece of the action. Political bigwigs, high-ranking bureaucrats, local henchmen and the ever-zealous media descend upon sleepy Peepli to stake their claim. The question on everyone's lips - "Will he or Won't he?" As the mania escalates, nobody seems to care how Natha really feels.