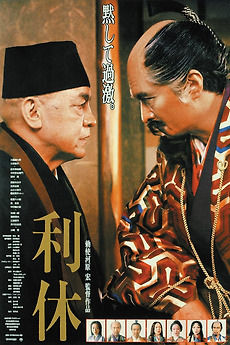 Late in the 1500s, an aging tea master teaches the way of tea to a headstrong Shogun. Through force of will and courageous fighting, Hideyoshi becomes Japan's most powerful warlord, unifying the country. Rikyu, through the tea ceremony and floral arrangements, tempers his lord, helping Hideyoshi focus on a single flower or be in a simple room where the shape of a cup is of most importance. But other forces fuel Hideyoshi's ambitions: the Portuguese bring a globe and guns, and he believes he can conquer Korea and China. When Rikyu raises doubts about invading China, Hideyoshi demands an apology, and Rikyu himself must find courage in the way of tea.

I'm 28: Here's the 27th one in review. A list of my favorite reviewers and cinephiles on LBd.

These are the greatest films* I have ever seen, and from which I am in the process of establishing a…

"[...]while only a small handful of new directors emerged in the 1970s and 1980s to launch the Japanese cinema into…