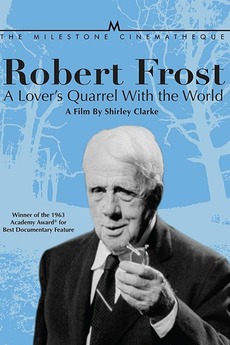 Robert Frost: A Lover's Quarrel with the World
JustWatch

Robert Frost: A Lover's Quarrel with the World

The acclaimed poet is examined in this film completed just prior to his death at age 88, with his speaking engagements at Amherst and Sarah Lawrence Colleges intercut with studies of his work, as well as with scenes of his life in rural Vermont and personal reminiscences about his career. He is also seen receiving an award from President Kennedy and touring an aircraft carrier.