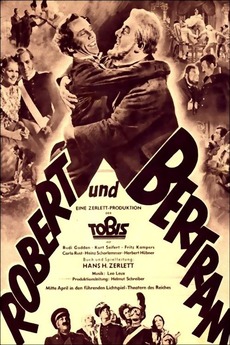 After the two vagabonds Robert and Bertram flee from prison, they get to know the innkeeper’s daughter Lenchen at the “Silver Swan” Inn. Because her father is in desperate need of money, Lenchen is to marry the creditor Biedermeier instead of her beloved military recruit Michel. In order to prevent that, Robert and Bertram travel to the capital and, under false names, manage to make their way into the house of the Jewish commercial advisor Ipelmeyer, to whom Biedermeier is deep in debt. During an evening costume ball, the bums steal the family jewels and give them to Lenchen’s father. Lenchen and Michael get married and Robert and Bertram flee in a balloon into the sky.