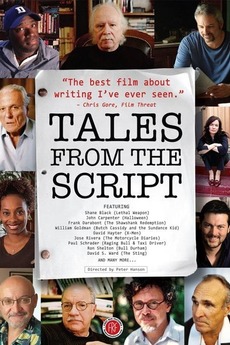 Tales from the Script

Shane Black ("Lethal Weapon"), John Carpenter ("Halloween"), Frank Darabont ("The Shawshank Redemption"), William Goldman ("The Princess Bride"), Paul Schrader ("Taxi Driver"), and dozens of other Hollywood screenwriters share hilarious anecdotes and penetrating insights in "Tales from the Script," the most comprehensive documentary ever made about screenwriting. By analyzing their triumphs and recalling their failures, the participants explain how successful writers develop the skills necessary for toughing out careers in one of the world's most competitive industries. They also reveal the untold stories behind some of the greatest screenplays ever written, describing their adventures with luminaries including Harrison Ford, Stanley Kubrick, Joel Silver, Martin Scorsese, and Steven Spielberg. The film was produced in tandem with the upcoming HarperCollins book of the same name.