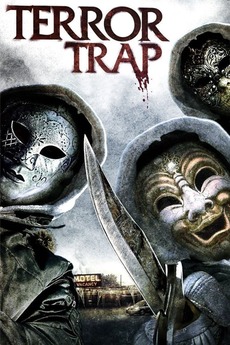 Once you check in, there's no escape...

Driving to a weekend getaway, a car breakdown strands young couple Don and Nancy (David James Elliot and Heather Marsden) while passing through a small, rural Louisiana town. Finding the couple on the roadside, the towns inhospitable Sheriff Taylor (Jeff Fahey) tells them therell be no one to repair their car before morning. He directs them to a nearby motel for the night run by Carter (Michael Madsen). Checking into the seedy, rundown establishment, Don and Nancy have no way of knowing how this place deals with outsiders. Badge aside, the Sherriff answers to Carter, as do a gang of twisted, masked kidnappers, torturers, and killers. By the time Don and Nancy realize whats happening, its too late to flee. They must fight to survive the night, or be the next victims of the Terror Trap...

Films I Own But Haven't Watched

A list of movies I own but are just gathering dust on my shelves. This list was partially inspired by…

Official DVDs I Own

List containing all of the DVDs I have bought over the years. I remember "Red Scorpion" being my first.