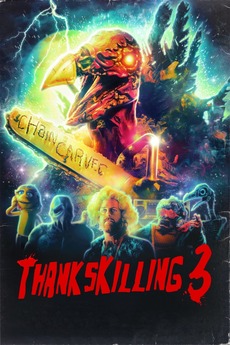 THE SEARCH FOR THANKSKILLING 2!

Fowl-mouthed villain Turkie carves through the likes of a rapping grandma, a mindless puppet, a wig-wearing inventor, a bisexual space worm, and their equally ridiculous friends on his quest to recover the last copy of "ThanksKilling 2". Also known as "Turkeys, In, Space!".