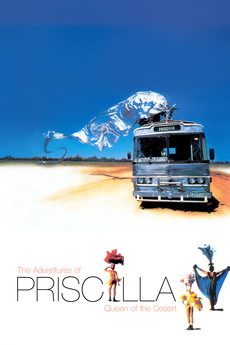 The Adventures of Priscilla, Queen of the Desert
JustWatch

The Adventures of Priscilla, Queen of the Desert

She's back... Looking as gorgeous and outrageous as ever in a brand new frock.

Two drag queens and a transgender woman contract to perform a drag show at a resort in Alice Springs, a town in the remote Australian desert. As they head west from Sydney aboard their lavender bus, Priscilla, the three friends come to the forefront of a comedy of errors, encountering a number of strange characters, as well as incidents of homophobia, whilst widening comfort zones and finding new horizons.