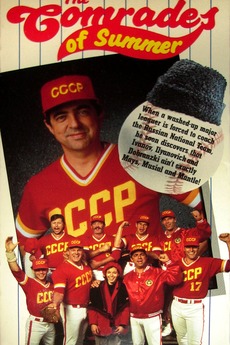 The Comrades of Summer
JustWatch

The Comrades of Summer

To teach a team of Russian wanna-be baseball players the finer points of the all-American game is no easy task, but for a grudgingly resentful, recently fired baseball manager from the States, the task is formidable. In fact, there are many times when he considers chucking the whole thing and going back home and forgetting baseball entirely. But he perseveres... to the point where he finally believes that his players may be good enough to represent the Soviet Union in the upcoming Olympics in America. However, performing in this Country under such pressures not only shows these Russian players something about themselves, it also makes their American manager aware of something rather special about himself, as well.

If You Inhaled Burning Plastic I Guess

Contaminated with some sort of mutating toxin, monsters discovered film and video cameras, and proceeded to churn out the horrors…

I did this instead of watching the show. Actors who were in the title sequence for atleast one episode are…

Taking recommendations to keep this updated