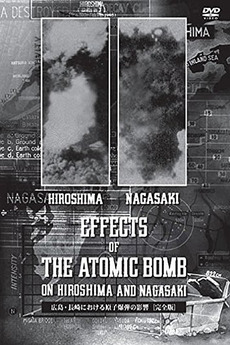 The Effects of the Atomic Bomb on Hiroshima…
JustWatch

The Effects of the Atomic Bomb on Hiroshima and Nagasaki

This was the only documentary made in the aftermath of the atomic bombings of 1945. Japanese filmmakers entered the two cities intent on making an appeal to the International Red Cross, but were promptly arrested by newly arriving American troops. The Americans and Japanese eventually worked together to produce this film, a science film unemotionally displaying the effects of atomic particles, blast and fire on everything from concrete to human flesh. No other filmmakers were allowed into the cities, and when the film was done the Americans crated everything up and shipped it to an unknown location. That footage is now lost. However, an American and a Japanese filmmaker each stole and hid a copy of the film, fearful that the reality of Hiroshima and Nagasaki would be hidden from history. Eventually, these prints surfaced and became our only precious archive of the aftermath of nuclear warfare -- a film that everyone knows in part, yet has rarely seen in its entirety.

In honour of my new university module starting, I'm compiling a list of films and documentaries that feature the development…

From November 8 2016 onwards this is no longer a film list but a survival manual.