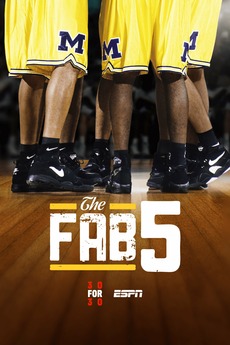 Depicts the story of Jalen Rose and his other Fab Five teammates, Chris Webber, Juwan Howard, Jimmy King and Ray Jackson. Called by some “the greatest class ever recruited,” the five freshmen not only electrified the game, but also brought new style with their baggy shorts, black socks and brash talk. “The Fab Five” relives the recruitment process that got all five of them to Ann Arbor, the cultural impact they made, the two runs to NCAA title game, the Webber “timeout” in the 1993 championship and the scandal that eventually tarnished their accomplishments.

Most entries I try to post a thought or review of some sort by and large. I won't get them…

All 30 for 30 Documentaries including Shorts and Soccer Stories

tell me what I'm missing in the comments

(also i stopped star rating docs a few years ago, so take…

Includes Volumes I, II, and III, as well as Shorts, SEC Storied, Soccer Stories, and Nine for IX films (as…

There are a lot of incomplete lists here. I hope this one will cover all of them. Suggest movies in…