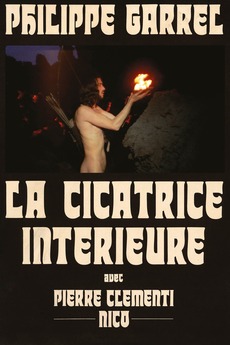 A composition of symbolic, surreal and almost mystic images.

A collage of dreams. Garrel made a name for himself with this film as a new Jean Vigo. With Nico (Velvet Underground). A poetic and painterly film that has been described as 'a collage of dreams'. The film was shot without a script, but Garrel had already thought up the eventual title ('the scar inside'). This title was an obsession for him, every shot had to be an expression of 'the scar inside'. Apart from Garrel himself and actor Pierre Clementi, Garrel's former partner Nico, member of the legendary Velvet Underground, played a role in the film. Another important role was for the landscape. Garrel, 23 when he made the film, was compared with Jean Vigo because of his age and talent. La cicatrice intérieure even led Claude Mauriac to call him the Rimbaud of film.