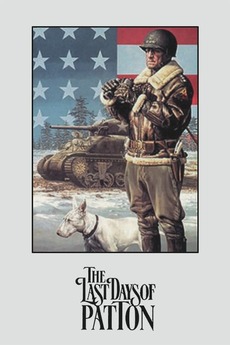 The Last Days of Patton
JustWatch

The Last Days of Patton

As a result of General George S. Patton's (George C. Scott) decision to use former Nazis to help reconstruct post-World War II Germany (and publicly defending the practice), General Dwight Eisenhower (Richard Dysart) removes him from that task and reassigns him to supervise "an army of clerks" whose task is to write the official history of the U.S. military involvement in World War II. Shortly thereafter, on December 9, 1945 (a day before he was to transfer back to the United States), Patton is involved in an automobile accident that seriously injures his spinal column, paralyzing him. As he lies in his hospital bed, he flashes back to earlier pivotal moments in his life, including stories his father told him of his grandfather's service during the American Civil War which inspired him to attend the United States Military Academy at West Point, his marriage to his wife Beatrice (Eva Marie Saint), and his championing of the use of tanks in the United States Army.

Films set in Lincolnshire (or perhaps even filmed ever so slightly within).

Feeling underrepresented as a Yellowbelly.

One of the daily quizzes the other week gave me the idea to do this list. Listed are movies where…