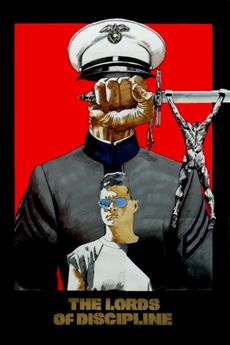 The Lords of Discipline

One hundred years of the finest school turning out the finest young men. IT WAS ALL A LIE. One cadet is about to expose the system.

Will arrives for his last year at Military Academy, in the Deep South USA, in the 1960's. A black student, Pearce, has been accepted, for the first time and Will is asked to keep an eye out for the inevitable racism. The racists come in the form of The Ten, a secret group of the elite students. They want Pearce to leave on his own free will, but are prepared to torture him to make it 'his free will'. Will is forced to help Pearce and he is prepared to risk his own career to do so.