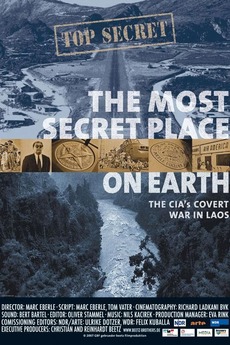 The Most Secret Place on Earth
JustWatch

The Most Secret Place on Earth

After 30 years of conspiracy theories and myth making, this film uncovers the story of the CIA's most extensive clandestine operation in the history of modern warfare: The Secret War in Laos, which was conducted alongside the Vietnam War from 1964 -1973. While the world's attention was caught by the conflict in Vietnam, the CIA built the busiest military airport in the world in neighboring and neutral Laos and recruited humanitarian aid personnel, Special Forces agents and civilian pilots to undertake what would become the most effective operation of counterinsurgency warfare. As the conflict in Vietnam grew, the objective in Laos changed from a cost effective low-key involvement to save the country from becoming communist into an all-out air war to cut the Ho Chi Minh Trail and bomb Laos back into the Stone Age that it had never really left in the first place. Conventional bombs equivalent to the destructive power of 20 Hiroshima-type weapons fell on Laos each year - 2 million tons