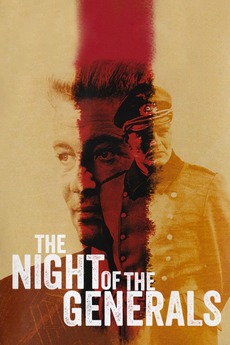 The Night of the Generals
JustWatch

The Night of the Generals

A unique manhunt across the capitals of Europe... across three decades up to today!

An unusual World War II crime thriller about a Nazi investigation into the murder of a prostitute. Major Grau finds himself focusing on three suspects: the Generals Tanz, Kahlenberg and Seydlitz-Gabler – all three of whom, it seems, are also involved in a plot to kill Hitler