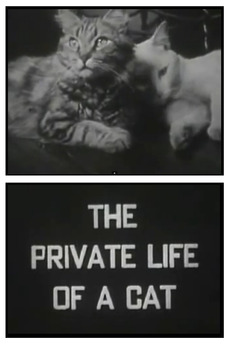 The Private Life of a Cat
JustWatch

The Private Life of a Cat

Life of a domestic cat, filmed from a cat’s-eye view. This film was circulated in two versions: a silent version without narration and a somewhat longer sound version with a narration read by filmmaker Alexander Hammid’s then-wife, Maya Deren. Takes place over a period of months as the cat gives birth to a litter of kittens and she cares for them as they grow.

For a film to be included here, the short must be under 45 minutes in length, and have 500 views.…