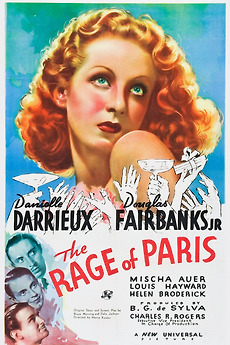 The Rage of Paris
JustWatch

The Rage of Paris

Nicole has no job and is several weeks behind with her rent. Her solution to her problems is to try and snare a rich husband. Enlisting the help of her friend Gloria and the maitre'd at a ritzy New York City hotel, the trio plot to have Gloria catch the eye of Bill Duncan, a millionaire staying at the hotel. The plan works and the two quickly become engaged. Nicole's plan may be thwarted by Bill's friend, Jim Trevor, who's met Nicole before and sees through her plot.

Classic (pre-1951) screwball comedies, listed in order of preference. Top 20 are among my favourite films, and any in the…

The fifth in our series of genre polls at the SCFZ film forum covered Comedy. As in our other polls,…

comfort movies in general. films that can either speak to my soul, whip my tears or embrace my pain; that…