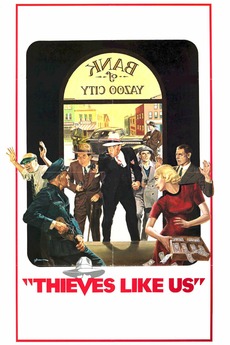 Robbing 36 banks was easy. Watch what happens when they hit the 37th.

Bowie, a youthful convicted murderer, and bank robbers Chicamaw and T-Dub escape from a Mississippi chain gang in the 1930s. They hole up with a gas station attendant and continue robbing banks. Bowie, who is injured in an auto accident, takes refuge with the daughter of the gas station attendant, Keechie. They become romantically involved but their relationship is strained by Bowie's refusal to turn his back on crime. The film is based on the novel Thieves Like Us by Edward Anderson. The novel is also the source material for the 1949 film They Live by Night, directed by Nicholas Ray.