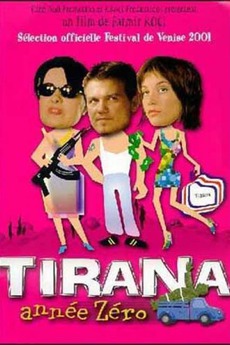 Tirana Year Zero (Tirana, année zéro), is a 2002 Albanian film that tells the story of a young couple in post-communist Albania, at a time when many Albanians left the country in search for a better life abroad. The protagonist of the movie is Nik, who lives in the capital of Albania, Tirana, along with his mother and father. He is in love with a beautiful girl named Klara, who wants to move to Paris to be a model. Nik makes his living with an old truck that belonged to his father, who is now sick, and seemingly dying. Amidst the criticisms of his mother, the confusion and desperation covering the country, and the desire of his girlfriend to leave, Nik is still unsure whether he wants to leave. The film explores the way Nik handles the events of his life.

From Slovenia to Greece, to Bulgaria

After the Collapse: the Post-Communist Collection

Films and documentaries about post-communism in Central/Eastern Europe and the former Soviet Union: life in transition, nostalgia, memory, migration, European…

This list is a personal effort to collect all films produced or co-produced in Albania that are currently on letterboxd.…