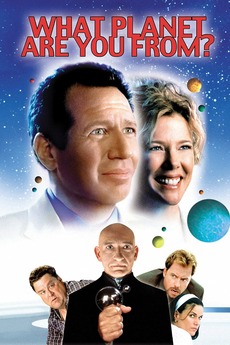 What Planet Are You From?
JustWatch

What Planet Are You From?

To save his planet, an alien must find a woman on Earth to have his baby. There's just one problem.

A highly-evolved planet, whose denizens feel no emotion and reproduce by cloning, plans to take over Earth from the inside by sending an operative, fashioned with a humming, mechanical penis, to impregnate an earthling and stay until the birth. The alien, Harold Anderson, goes to Phoenix as a banker and sets to work finding a mate. His approaches to women are inept, and the humming phallus doesn't help, but on the advice of a banking colleague, he cruises an AA meeting, meets Susan, and somehow convinces her to marry. The clock starts to tick: will she conceive, have a baby, and lose Harold (and the child) to his planet before he discovers emotion and starts to care?

Writer/director/performer Mike Nichols emerged from a background in improvisational comedy, most famously teaming up with Elaine May for the Nichols…

I usually find the exceptions and oddities in a director's filmography interesting. And a lot of well-known directors ventured into…

Ebert's second collection of negative reviews reads like a list of what to avoid from the early 21st Century. This…