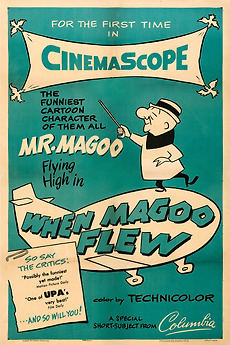 Mr. Magoo sets off to go to the movies but goes to an airport by mistake and gets on a plane thinking it to be a theater. Little does Magoo know the man he is sitting next to is actually a thief and when a detective appears on the plane to track the thief down, Magoo thinks it's all part of the movie. After doing some wing walking, Magoo reenters the plane and exposes the thief to the detective. When the plane lands, Magoo remarks that they should have shown a cartoon particularly one with that "delightful near sighted fellow".

Animated short films made before 1970. Mostly traditional, hand-drawn, and kid-friendly, but also includes some stop-motion and avant-garde works that…

Every Oscar Winner EVER 🏆

Every movie awarded an Oscar in the history of the Academy Awards, including:

A lot of Short Animation in general, included all Academy Award Nominees for Best Animated Short…

The Canon of the Golden Age of Hollywood