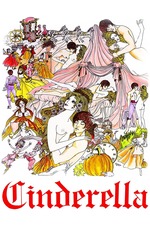 Shlock producer Charles Band's soft core take on the Cinderella story, starring the lovely, talented, charming, but tragic Cheryl "Rainbeaux" Smith. I saw this movie on late night cable at a tender age, and was frankly baffled at some of the stuff I was seeing ("Girls, kissing girls? Huh?").

But while I can't argue this is a "good" movie in the classic sense, it does feature nice sets, period costumes and props, and the songs are pretty good. The sex is pretty plentiful, if shot unimaginatively by director (but better known as an actor) Michael Pataki. Some of the jokes involving the Fairy Godfather are cringe-worthy (racist and homo-phobic at the same time), but overall the tone is one of good-natured silliness, and the sex is, for the most part, meant to be joyful and fun.