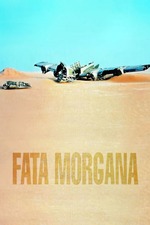 This is some top shelf nonsense. It's basically Werner Herzog went into the desert, shot a bunch of random stuff, and then edited it all together with Leonard Cohen playing over it. At first it seemed like it was going to be really cool, with the long static shot sequence of planes landing, and then the mirages on the horizon, but the film totally alienated me with the creation myth narration, and the seemingly illogical collage of visuals. The most interesting thing about the film, is that Herzog re-uses the glasses that the blind characters wear in Even Dwarfs Started Small. I counted four characters in this documentary wearing the glasses, and I can only assume that Herzog was carrying them around, and then asking people to put them on.

Land of Silence and Darkness