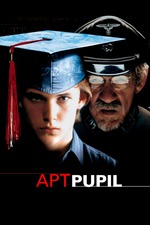 Bryan Singer's 1998 adaption of the Stephen King story is a study of the fascination that the Nazi era and the Holocaust continue to hold on contemporary society. Nazism remains a emblem of evil and as such, often finds its way into popular culture in various guises, including, more recently, the bizarre science fiction action comedy, Iron Sky. But Singer is more restrained with his use of Nazi iconography than other filmmakers would be, as his primary concern is with exploring the corrupting seduction of power and control.

Listed by King as his favourite of all of the film adaptations of his works, Apt Pupil examines the fascination with Nazism that high achieving senior Todd Bowden Brad Renfro) develops after his history class studies the Holocaust in class. Bowden becomes obsessed with the topic: attracted and repelled by the evils committed by the Nazis, until during a chance encounter on a bus he things he recognises an old man who he believes to be Nazi war criminal Kurt Dussander (Ian McKellen). After confirming the man's identity through fingerprints, Bowden confronts Dussander and decides the blackmail the Nazi into telling him the grisly details of his most repugnant deeds. But the boy gets much more than he bargained for, awakening within Dussander a sleeping evil that soon takes control of their relationship until Bowden becomes the very thing he despises and uses his newfound boldness and power to prey on the weak.

More an intriguing character study and cat-and-mouse tale than a thriller as such, Apt Pupil cleverly touches on topics such as the Hitler Youth, suggesting that Bowden is seduced into its ranks much like those German youths in the 1930s responding to the seductive promise of power offered by Hitler and his faction.