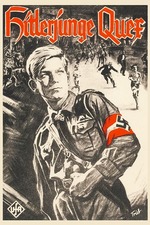 1933 was the year the National Socialists were elected into power and the rest, as is often stated, is history. Two things that the Nazi's prized was youth and film as a propaganda tool. In Hitlerjunge Quex the party got off to an early start with this film, directed by the Third Reich's go-to master of biographical melodrama at UFA studios, Hans Steinhoff, who had been making films since the early 1920s. Rousing melodrama is precisely what Steinhoff serves up in Hitlerjunge Quex with its young hero Heini caught between a war of opposing ideologies with his parents and neighbours are all loyal Communists while he is drawn to the discipline and order of Fascism. Steinhoff wisely withdraws from simplistic caricatures of both the Communists and the Fascists yet remarkably the film, designed to create sympathy for the Nazi's, refuses to demonise the Communists apart from those rabid Bolsheviks that eventually hunt down and kill Heini. While the Communists are shown as poor, disheveled, reactionary and disorganised, they are also great lovers of life who enjoy the excesses of booze, sex and tobacco and value living each day to the full. Meanwhile the Fascists' beige coloured uniforms reflect their similarly monochrome lifestyles which are singularly committed to Herr Fuhrer's cause.

The film is loosely based on the true story of Herbert Norkus, a young boy who was murdered by the Communists in 1932. His death came at a particularly fortuitous time for the Nazi's who, at his funeral a speech crafted by propaganda master Goebbels, ensured the child was afforded the status of a martyr.