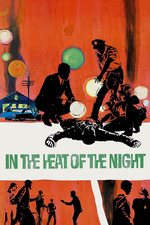 From the opening strains of Ray Charles singing the title song as Virgil Tibbs' train pulls into Sparta, Mississippi, I was instantly immersed into the world of the ruined, depressed South with its oppressive humidity, small town complacency and rural backwater suspicion of strangers. The real joy of the film is the chemistry between Poitier and Steiger: both competent men of the law from difference sides of the tracks who are forced to work together against a festering hot bed of xenophobia. This is one of the masterstrokes of the film: both men are outsiders attempting to enforce the law and solve a local case in a race against time. The xenophobic attitudes of the local Spartans applies as much to Gillespie as it does to Tibbs, except that skin colour complicates the issues even further. Gillespie's own subordinates are constantly insubordinate, working like resentful teens to make their new chief's job just that much harder. The fact that Gillespie arrests one of his own officers (played by the wonderful Warren Oates) when evidence (wrongly) suggests the man is a murderer provides insight into the antagonistic relationship between the chief and his men.

This unlikely buddy cop narrative is a well-observed masterwork from beginning to end.