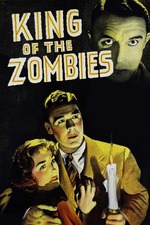 King of the Zombies

Inspired by the highly successful cycle of Universal horror films in the 1930s, KING OF THE ZOMBIES was directed by veteran filmmaker Jean Yarbrough whose previous production had been the Bela Lugosi thriller, THE DEVIL BAT for Producers Releasing Corporation in 1940. Monogram Pictures hoped to bring Yarbrough and Lugosi together again for KING OF THE ZOMBIES but Lugosi's schedule meant he was never available for the Monogram shoot. After shopping around for a leading villain and finding that second preference actor Peter Lorre was also unavailable, the role was given to veteran screen actor Henry Victor who, during the war, was often cast in the role of the malevolent Nazi. Victor had previously appeared in Warner Bros.' maverick 1939 production, CONFESSIONS OF A NAZI SPY, which was popular with movie audiences but not so with the Hayes Office which had attempted to shut down the production in order to protect volatile Hollywood business interests still operating in Nazi Germany.

As the cycle of Universal monster movies migrated to satire at the end of the thirties, horror comedies became increasingly popular and inspired the likes of George Marshall's 1940 comedy, THE GHOST BREAKERS, starring a jittery Bob Hope spouting one liners while fending off Cuban castle spooks. Monogram Pictures jumped on the comedy horror bandwagon with KING OF THE ZOMBIES, casting popular black comic actor Mantan Moreland in the cowardly Bob Hope role (Moreland reprised his character for a 1943 sequel, REVENGE OF THE ZOMBIES, starring John Carradine and Gale Storm, and directed by Steve Sekely). Moreland's histrionics and one-liners proved so effective and engaging that they often overshadow the main thriller plot line, prompting the Motion Picture Herald review to note, "although the story is treated seriously ... it is as a comedy rather than as a thriller that it succeeds". As with black comedy superstar Steppin' Fetchit, contemporary audiences often mistake Moreland's performance as a negative racial stereotype, but to do so is to undermine the comic genius of this groundbreaking black artist who uses humour to ridicule white culture in much the same way that Richard Pryor and (a little later) Eddie Murphy would do three decades later. One need only compare the amount of screen time, one-shots and close ups that Moreland receives compared to his white co-stars to see that there is something exceptional taking place in this film.

KING OF THE ZOMBIES opens with meteorologist James McCarthy (Dick Purcell before landing the role of Captain America in the popular 1940s serial) and his manservant Jefferson (Moreland) on board a plane blown off course over the Caribbean and low on fuel. The pilot, Bill Summers (John Archer), crash lands the plane on a remote island where a strange Viennese scientist, Dr. Miklos Sangre (Henry Victor) is performing mysterious experiments. The men are introduced to the doctor's wife, Alyce (Patricia Stacey), who suffers a strange malady that renders her zombie-like, and the doctor's feisty niece, Barbara (Joan Woodbury), who seems desperate to escape the island.

Jefferson continually witnesses zombies entering and exiting Sangre's spooky mansion but has a tough time convincing white men James and Bill of what he sees. In one scene, the evil doctor's comatose wife creeps ghostlike into the sleeping men's bedroom and drops an earring on their bed in the hopes of somehow being revived from her terrible living dead condition. Only Jefferson sees the zombified woman and is not believed until the men find the earring and begin to suspect their host's insidious intentions. Remarkably, the sequences involving Alyce Sangre bear an uncanny resemblance to Edith Barrett's character, Mrs Rand, in Val Lewton's horror masterpiece I WALKED WITH A ZOMBIE (Tourneur 1943). As with Mrs Rand, Alyce has perfected a slow, gliding walk that is both unnerving and ghostly, and it is tempting to consider that Tourneur and Lewton had both seen KING OF THE ZOMBIES and drawn inspiration from the film.

Unfortunately the white men are a little too slow to believe Jefferson and Bill, already weakened after the plane crash, is attacked by a zombie and is soon afterwards pronounced dead. After Bill's death, James and Jefferson search the bowels of the mansion and discover a forbidden voodoo ritual. The pair see that Bill stands in line with other zombies and kneeling in front of the altar where the doctor stands is Barbara. Opposite Barbara is missing US admiral Arthur Wainwright (Guy Usher) who we are told had earlier also disappeared while flying over the Caribbean. Through a combination of voodoo and hypnosis the doctor seeks to transfer war secrets from the Admiral's brain into his niece's head and thereby share the secrets with the Nazis back in Europe via his hidden radio unit.

The two interlopers are discovered at the voodoo ritual and the doctor orders the zombies to kill the two men. As the phalanx of the living dead lurch closer, led by Bill, James appeals to Bill as his friend and suddenly Bill leads the other zombies away from James and Jefferson and focus on the doctor, who falls to his death. The men wire Washington and are saved while the Nazis' supernatural espionage attempt is foiled. As a point of interest, the voodoo sequence in KING OF THE ZOMBIES famously appears in Ann Turner's remarkable 1989 Australian coming-of-age film, CELIA, as the titular character Celia and her family watch the film at their local cinema and later, Celia is inspired to perform her own voodoo ritual to punish her childhood enemies.

While watching KING OF THE ZOMBIES, I paused during one scene and looked in my copy of Harry M. Benshoff's excellent scholarly study of queerness in horror cinema, "Monsters in the Closet: Homosexuality and the Horror Film" to see if the film was included. To my surprise, it isn't. During the first half of the film there are very few shots that don't include Dick Purcell and John Archer in frame (while Mantan Mooreland gets the lion's share of close ups and one shots) and the two men are dressed in similar clothes, sport similar hairstyles and are frequently positioned in close proximity to one another.

One might wonder whether director Yarbrough was at all influenced by the mighty James Whale, who freely expressed his homosexuality on the Universal sound stage and injected an explicitly camp sensibility into his two FRANKENSTEIN films. A quick search on the internet to check out Yarbrough's personal life turned up nothing, despite his impressive filmography. There is no data to confirm whether he married and had kids, or whether he remained single, or whether he was gay.