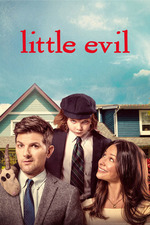 Perhaps the most impressive aspect of Eli Craig's 2017 horror comedy LITTLE EVIL is how much child star Owen Atlas looks like Harvey Stephens who played the original five year old Antichrist Damien Thorn in THE OMEN. Predictably much of Little Evil draws on THE OMEN as its main source of narrative inspiration, along with hints of ROSEMARY'S BABY and a couple of clumsy homages to other films featuring creepy kids, such as POLTERGEIST and THE SHINING.

I found the first two thirds of LITTLE EVIL uninspired and contemplated not finishing the film. However, I'm glad I stayed with it because when Atlas finally talks and the relationship between him and his new stepfather Gary, played by Adam Scott , starts to develop, the film finally veers away from typical predictability and becomes a much more interesting and engaging film as both characters have a change of heart. From hereon in it very much follows a similar trajectory to that of Denis Dugan's highly entertaining 1990 evil kid comedy PROBLEM CHILD, but it really works, and it's nice to see the horror make way for a bit of sincere drama that both Scott and Atlas perform very well together.

Welcome cameos by Clancy Brown and Sally Field are a lot of fun and both actors make chewing the scenery immensely entertaining, especially Field who does a fabulously campy impersonation of Billie Whitelaw's intense Mrs. Baylock from THE OMEN. Another interesting feature of the film is its exploration of masculinity in crisis as step-fathers struggle with feeling like an impotent fifth wheel in their relationships. LITTLE EVIL does a credible job of representing the uncertainty, resentment and fear felt by males about how to insert themselves into an existing family unit where their mother and child already enjoy an inseparable bond. LITTLE EVIL resolves this problem somewhat unconvincingly but for a throwaway Netflix genre film it can be forgiven its flaws.