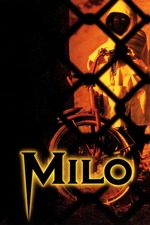 As part of my ongoing investigation of evil child films for my doctorate, I took time to watch the 1998 film, Milo, helmed by TV movie director Pascal Franchot. Let me begin by asserting that if you are searching for a good scary horror film, this is neither good nor scary. Yet it is nonetheless an interesting film that unfolds like a dream and invests in psychoanalytic notions of the return of the repressed.

The title character is an interesting screen invention, played by twelve year old Asher Metchik, who looks-or is made to look-small and young for his age. Were one to guess the age of Metchik as Milo, who is shown only in brief semi-concealed snatches on screen before the bizarre final climax, I would have placed him as anywhere between eight and ten. Even more intriguing is the replacement of Metchik's voice with that of sound effects editor/foley artist, Rick Knowlton. The effect is quite intriguing and of course reminds me of another evil child whose voice was replaced: Regan MacNeil from The Exorcist. Played by Linda Blair, once Regan's possession takes over, the voice of the demon Pazuzu who speaks through Regan is played by the lovely studio era Hollywood actress, Mercedes McCambridge (who among her many roles plays a tough-as-nails rancher in Nicholas Ray's 1954 Western, Johnny Guitar).