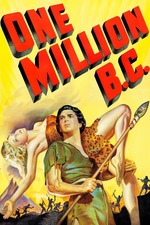 One Million B.C. did good business on its release in 1940 and, despite the years, parts of the film have aged remarkably well. One of these is not its entirely unnecessary opening sequence, in which a bunch of hikers dressed in German lederhosen take refuge in a cave and happen upon a wizened pipe-smoking palaeontologist who, as the resident "expert", spins a yarn to his captive audience about cave people that cuts to its on screen dramatisation. This early sequence is so slow and contrived that contemporary audiences may not have the patience to get past it, which is a shame as parts of the film thereafter are quite absorbing and contain a decent dose of the spectacle that made fantastical prehistoric films so appealing.

I was left speculating about why, in 1940 with WWII already a year in, the film is set in a conspicuously German location as indicated by the costumes worn by the hikers. Might it have to do with the so-called Neanderthal Man whose remains were found in West Germany? Or could it be that the film promotes a message of peace where even warring prehistoric tribes, despite their lack of civilisation, find a purpose to work together? Considering just how heavy-handedly didactic and sermonising moments of this film are, I suspect it is the latter.

Directors Hal Roach Sr. and Jr. seem to at times approach their prehistoric tale from an anthropological perspective which both helps and hinders the film. They seem so concerned with representing the lifestyles of the prehistoric folk with such authenticity (!) that the action is at times painfully slow and at others simply laughable: prehistoric humans and dinosaurs did not exist simultaneously (a forgivable error in dinosaur films as facts have never stood in the way of Hollywood spectacle), but more glaring is the final scene which imposes a bizarre message about the sacredness of the contemporary nuclear family structure. Equally baffling is the idea that although speech has not yet developed beyond grunts and two syllable sentences, the more complex language of music is a given.

The two tribes represented on screen are clearly at different levels of social advancement with Victor Mature, as Tumak making an unsuccessful grab for power in his own tribe that ends with his shunning and adoption into a more civilised order, with mixed results, Efforts to show the tribes levels of socialisation are at times so laboured that they become redundant and drag out for far too long. But dull moments aside, there are some remarkable sequences that will actually impress contemporary audiences if they can endure the slower moments.

One such moment is the volcanic eruption and earthquake that causes rockslides and a lava flow that engulfs one of the characters in a scene that may have you wondering how on earth this was achieved without killing the actor.

For lovers of practical effects, if you can get past the slow moments that dog this film and drag it out unnecessarily, you will find some impressive moments that still stand up. The film no doubt inspired later dinosaur films such as the highly successful 1966 Hammer studios film One Million Years B.C. that follows the same (loose) narrative structure.

Any Questions for Ben?