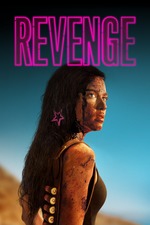 A stylish, well-shot and competently acted rape-revenge thriller set in Morocco, which makes for a great setting but by the end of the film I felt like I had watched a scaled-back four-hander version of FURY ROAD without the savvy sexual politics. Unfortunately REVENGE was too formulaic for my tastes. Knowing it was directed by a woman, I hoped for more from newcomer Coralie Fargeat. It certainly looks beautiful but as a rape-revenge film its gender politics were just too simplistic. I guess I was hoping for something more like the French film BAISE MOI (2000) but unfortunately REVENGE doesn't hold a candle to that intelligent and incendiary satire, nor even to those male directed rape-revenge films MS.45 (Ferrera 1981), I SPIT ON YOUR GRAVE (Zarchi 1978), or even THE LITTLE GIRL WHO LIVES DOWN THE LANE (Gessner 1976).

While the film is beautifully shot, plot-wise REVENGE asks an awful lot of its audience, stretching credibility to breaking point in order to hammer home its clearly valid point about the oppression of women under patriarchy. Soon to be victim Jen arrives in the film a soft and coquettish urban child sucking on a lollypop like some anime princess clad in a cheerleader outfit. Once mortally wounded and stranded in the desert she somehow develops keen survival skills, patches herself up, and kills a man twice her size (hardly a spoiler as she despatches all her assailants as per the well worn plot of the rape revenge film), and yet she still remains the sexualised subject of the male gaze, clad in an outfit that might make Lara Croft's eyes water. The mixed ideological messages are vertigo-inducing.

A particularly noteworthy moment is a startling dream within a dream that seems to push the limitations on how far one can exploit mise en abyme. The final cat and mouse chase sequence starts out well but becomes so protracted that the tension quickly dissipates and becomes tiresome. The moments when the male characters are tortured were for me rather problematic because the excruciating bloodletting and close-up gore is so uncomfortably in-your-face that the filmmaker ends up torturing the audience. Is that possibly the intention? Was this film made with a male audience in mind?