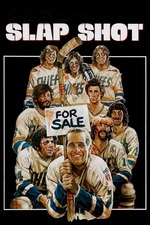 SLAP SHOT is a rags to riches comedy/drama about a federal league ice hockey squad on the skids. After the team's lacklustre coach gets wind that its anonymous owner intends to make this their final season, he encourages the players to become thugs on the ice and spreads a rumour that they were up for sale. It's an unlikely premise but somehow it works. Once the team start playing a dirty, violent game, they become the notorious toast of the league as the film effectively makes fun of the business side of sports as well as the public taste for gladiatorial spectacles of blood and violence. This is a super smart movie about gender roles, class, social cohesion, and the American dream set in a depressed steel town where the main form of employment is the local mill that is about to close. Thus the film also explores the decline of American industry and its impact on the working class. Obviously a film that has influenced countless subsequent sports films since (THE MIGHTY DUCKS, THE REPLACEMENTS, MAJOR LEAGUE) one can also see other films that have obviously drawn inspiration from SLAP SHOT, such as the 1986 Ron Howard vehicle GUNG HO!

I find it ludicrous that some reviewers feel the need to remark on the sexism and homophobia in the film, which I actually found rather tame, especially when watched in context. Such comments are anachronistic and fail to take into account the historical and social conditions within which the film was made, let alone its intended audience. It's also amusing because such comments conveniently overlook the current state of commmerical sports that even today are rampantly homophobic as conservative corporate interests continue to refuse to sponsor gay athletes, preferring to perpetuate outdated stereotypes about homosexuality and the idea that team sports are an exclusively heterosexual domain.