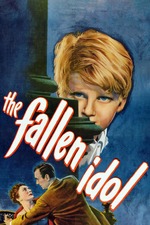 Carol Reed and Graham Greene together provide a remarkably light touch to this suspenseful drama about a humble butler wrongly suspected of killing his spiteful wife. Ralph Richardson is well cast as the gentle butler Baines who works at the French Embassy in London and is beloved by his employers' young boy Philippe, played with immense nuance by Bobby Henrey. Baines' wife (Sonia Dresdel) is the officious and often nasty housekeeper of the opulent embassy mansion. Jealous of the relationship between Baines and Philippe, she treats both with a disdain that verges of cruelty.

The film takes place over the few days while Philippe's parents are away and Baines' months-long infatuation with a French secretary working at the embassy comes to a climax. Suspecting an affair, Mrs Baines pretends to go out of town to visit a relative but has secreted herself at the embassy in order to catch her husband red-handed. When she is finally discovered, a heated row ensues. Mrs Baines climbs out on a precarious window sill and slips to her death. Philippe has been spying on the couple but only sees them fighting at the top of the stairs and next sees her at the bottom of the stairs dead, having not seen her slip and fall, and assumes that Baines pushed his wife down the stairs.

A motif of secrets is set up early on in Greene's screenplay as Philippe is told secret after secret and is much too young to contain it all in his confused little head. Wanting desperately to protect Baines but all the while believing had he killed his wife, Philippe becomes a central figure in the police investigation, trying to all he can to protect his friend but with each twisted lie makes things increasingly worse for the innocent Butler.

Carol Reed's film is not exactly a masterpiece but it is masterfully made. Greene's mannered dialogue is skillfully subtle and turns the screws so deliberately slowly so that by the time the final climax arrives the result is breathlessly tense. But it is Henrey's turn as Philippe that really makes the film work and is certainly among the best child performances ever captured on screen.