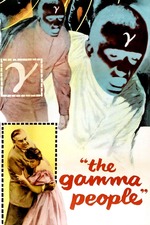 This science fiction oddity dabbles in Cold War anxieties but without the hysteria that characterises some of the other films of the period. This may be due to its comedic undertones and lightness of touch that make its more dramatic moments all the more effective. Although parallels with the Soviet threat are clearly legible, the film cleverly collapses ideological differences between the extreme left and right to demonstrate that oppressive totalitarian regimes, regardless of what side of politics, are all the same; a dangerous proposition for a Hollywood film to be expounding in McCarthy-era America. The film mines Nazi iconography with its quaint Bavarian folk costumes juxtaposed against Aryan children in uniforms reminiscent of Hitler's Youth movement. Four years later, Wolf Rilla's 1960 film Village of the Damned would likewise borrow from Hitler's Youth in characterising its emotionless platinum blonde children who sever all sentimental ties with their parents and keep the citizens of Midwich under their control.

In The Gamma People, comedy actors Paul Douglas and Leslie Philips team up as a pair of "Odd Couple" journalists travelling to a music festival in Salzburg by train when their caboose quietly uncouples and the pair-lost in their chess game-fail to notice as they roll away onto a disused track and into a hitherto unheard of totalitarian regime under the thumb of a Joseph Mengele-esque mad scientist and his brood of zombified henchmen. A product of the atomic age, the film focuses on dangerous and irresponsible science as the evil common enemy, yet a brief shot showing a pair of children waiting until the Salzburg train steams by before switching tracks to redirect the caboose suggests a psychic foreknowledge of the uncoupling. This vaguely supernatural moment connects The Gamma People to such later evil child films as Children of the Corn (Kiersch 1984) where a newlywed couple are lured to the rural town of Gatlin.

Douglas and Philips' American/British comedy coupling works well and the pair mine some of the stereotypical cultural differences between the two societies to great effect. Douglas' trademark bull-in-a-china-shop performance style fits the bill as the arrogant American abroad while Philips plays the foppishly polite Brit with a "tally-ho, wot, wot" Terry-Thomas stiff upper lip. There is a distinct queerness to the pair's relationship as they bicker and fuss like old ladies. This aspect of their relationship is further emphasised when they book into a hotel together and, of all the vacant rooms in the establishment, they are assigned the bridal suite and must share a bed. It's played for laughs as the two men exchange a brief moment of awkwardness, but director John Gilling obviously takes particular delight in suggesting a subversively homosexual undercurrent, peremptorily offset by an unconvincing heterosexual partnering in the film's final frames. A member of the Hammer alumni, Gilling helmed such laudable classics as The Flesh and the Fiend (1960) - a stylishly chilling adaptation of the true-life case of Westport murderers, Burke and Hare - as well as the fascinating little-known The Plague of the Zombies (1966) which reimagines the traditional Haitian zombie as a rotting reanimated corpse, beating Romero (credited as the father of the modern zombie) to the punch by two years.

Light touch aside, the sci-fi elements of The Gamma People involve a mad doctor's experiments with gamma rays on the local population in an effort to stimulate spontaneous evolution. The best candidates are children and, on those for whom the experiment is a success, these precocious youngsters exemplify the Hitler Youth, dressed in everything but a swastika as they spy on all the townsfolk to keep them afraid and submissive. The climax is reminiscent of James Whale's Frankenstein as a mob of angry villagers armed with torches and farming tools storm the castle. Of course, mention of Whale returns us to queer readings and there is certainly plenty of subversion bubbling away under the surface of this charming little 1950s "throw away" film if you can be bothered looking for it.

Never Too Young to Die