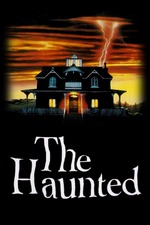 I have noticed a number of YouTube reviewers who regard this film with positivity yet nevertheless remark disparagingly about its made-for-TV status. There are even those that want to see a big screen adaptation of this. For me, the strength and power of THE HAUNTED is made possible precisely because it was produced for TV and and didn't have to compete with the big screen melodrama, stylised performances, whiz-bang SFX and impressive soundscapes associated with major theatrical release films. James Wan's beloved Conjuring series contains a level of pyrotechnics and soundscapes that cinema audiences expect, yet I find the frights in them a little too staged and slick to really get under my skin and, more importantly ... stay there. They feel a little too operatic and overcooked for me and never actually make me feel genuinely unsafe. I wonder if this is part of the broad appeal of contemporary popular horror films? They tend to be populated with jump scares that create momentary tension, but not enough to creep you out in a way that makes you feel unsafe.

THE HAUNTED focuses on building credible characters who are ordinary and familiar. As such, audiences feel more invested and intimately connected to them so that what happens to them really matters to us. It is also a story told with patience and economy so that if you feel big budget pyrotechnics are more scary, this is really not for you. Some of the simplest filmic devices used in the film deliver its biggest and most effective chills. Here I'm thinking of Sally Kirkland (who brings such strong emotional gravitas to her role) responding to the disembodied voice of her mother calling out to her from uninhabited spaces. The chills here are created entirely by acting and well-placed sound design.

But THE HAUNTED also has its lesser moments. Those moments when the film shows the ghosts are among my least favourite because that which is ineffable and frightening entirely because of its shapelessness is then given shape. And no screen monster can ever compete with the shapes we conjure in the dark forbidding recesses of our minds. Thus it is that those moments when the film invites us to use our imaginations to fill in the blanks are most effective.

Fear is very personal and not everyone is afraid of the same things. For me ghost stories have always held sway since I was a young lad afraid of the dark and THE HAUNTED is one of a number of superior ghost stories that have managed to get hairs on the back of my neck standing up, along with THE CHANGELING (Medak 1980), THE STONE TAPE (Sasdy 1972), THE HAUNTING (Wise 1963), THE INNOCENTS (Clayton 1961), THE ENTITY (Furie 1982), THE LEGEND OF HELL HOUSE (Hough 1973), LET'S SCARE JESSICA TO DEATH (Hancock 1971), THE UNINVITED (Allen 1944), and LAKE MUNGO (Anderson 2008).

Deep in My Heart