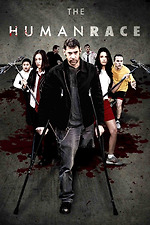 Has you ever played a "hypothetical" for a group interview? When I worked in Human Resources we used these all the time for group interviews. Essentially the group is given a drastic scenario-a "lifeboat" situation-in which there are limited resources and the group must determine who, based on such variables as age, gender, skills and occupation, will be kept in the boat and who will be left to die. There is no correct answer to hypothetical. At least one that matters. The point of the exercise is to observe interviewee participants communicate with one another as they attempt to problem solve. The most bombastic group member is a definite rejection, as is the person who does not participate at all. The ideal candidate is the one who contributes yet demonstrates active listening skills, while also encouraging less assertive group members to participate in the conversation.

Anyway, my point is that the film's conceit is a tediously familiar one and lies at the heart of any story in which protagonists are picked off one at a time and survivalist instincts kick in (Highlander, Saw, The Running Man, Turkey Shoot, The Most Dangerous Game, Gladiator, and so on). This doesn't stop some super-dooper ultra clever reviewers from smugly pointing out that aspects of the film resemble those of the Stephen King (writing as Richard Bachman) story called The Long Walk. It may be true that Paul Hough has borrowed elements from King's story but it is more likely that Hough has never even heard of The Long Walk and found inspiration in the superior The Hunger Games. Certainly many of the visual motifs used in The Hunger Games can be seen in Hough's film. Nevertheless, who and what inspired the writer/director of this pretentious film is just conjecture on my part. The truth is that there is little originality or freshness in The Human Race outside some of its highly committed performances. Rather, as I've already stated, the whole thing from end-to-end feels derivative. Still, for those who've not seen other earlier and better versions of this type of story (and this is highly likely of the millennial generation), Hough's film may prove immensely entertaining and gripping. Sigh.