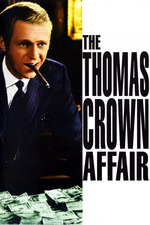 Steve McQueen's smarmy machismo is well-suited for his role as the eponymous Thomas Crown, while Faye Dunaway is his perfect foil. Norman Jewison's playful direction is still fresh almost fifty years later, complimented by Hal Ashby's editing, especially the use of split screens and isolated inserts (instead of using the more conventional cross-cutting) is captivating in how it cleverly facilitates the narrative while still being visually arresting. Finally, the film would not be what it is without Michel Legrand's sumptuous score, which is never more playfully erotic than in the chess game: the centrepiece of the film. According to Jewison, the kiss between McQueen and Dunaway that follows the chess game was so long and erotically charged that several newspapers refused to run the ad for the film. While the fashions may date the film, the caper story still holds up, and one wonders if it provided inspiration to Nolan for his opening bank robbery in THE DARK KNIGHT.