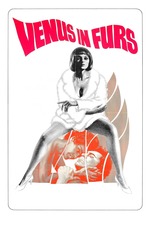 Jesse Franco's stylish exploitation thriller, Venus in Furs is a joy to watch not so much because of its story, , and more because of its formal qualities: a playful use of time, glossy location shots of Istanbul and Rio de Janeiro psychedelic lensing and sumptuous close ups, a rich colour palette and an intense sensuality that exudes from every frame. Loosely based on Leopold von Sacher-Masoch's novel of the same name, the narrative is essentially a simple ghost story in which a beautiful woman who is murdered by three sexual deviants in the throws of sexual passion returns to seek revenge on her killers. The film complicates this bare bones story with a love affair in which obsessive protagonist, Jimmy Logan (played by swarthy beefcake James Darren), is emotionally chained to his phantom lover, Wanda (Maria Rohm). The film ends in something of a mobius strip that collapses in on itself in a subjective nebula, leaving questions unanswered and causing the spectator to question all that they have just seen.

The suffusion of sexual perversion and oneiric subjectivism that characterises Franco's film seems to have been an inspiration for Lynch, whose Blue Velvet, Mulholland Drive, and even Twin Peaks share narrative details with Venus in Furs that surely suggest the auteur drew inspiration from this exploration art film. This is, of course, all conjecture, but watching Franco's film is very much like sitting through a Lynch film, from its sumptuous dreamscapes, doubling and doppelgängers, underlying sexual corruption, murder and supernatural revenge, and narratives that turn inside out and back on themselves.

They Call Me Mister Tibbs!