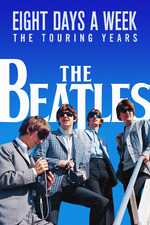 As a film, scattershot, shapeless and erratic. Howard has made some passable films, but I'm not sure he's skilled at artfully constructing a narrative or creating a subtle and purposeful experience with documentary elements.

That's all irrelevant, though, with a document this undeniable and subjects this irresistible and charming. The spirit and charisma of the Beatles was completely infectious and poured out of everything they did. The music captured here is epochal (at one point the genius and prolificness of their work is compared to Mozart), but what comes across most is their conviction in performing it. Ringo's drumming, for example, is truly ferocious. (He's so underrated as a performer and member of the group.) They performed like their lives depended on it, and the music isn't just great, it's authentic and genuinely them.

This same conviction and integrity comes across in all their interactions, with fans, journalistic and each other. In one early press conference, they're quick on their feet and downright hilarious. Beatlemania was a movement of youth and rebellion, but they weren't denigrating or mean-spirited. They simply put joy into the world by following who they were.