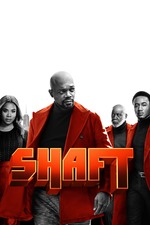 (Note: I have yet to see the original Shaft films)

Shaft is cheesy, crass and not willing to apologise for what it is. But what is it? Is it a comedy? Maybe but the tone can't seem to commit to it. Is it an action movie? Possibly but actual action is few and far between. Is it a roughly 2 hour vehicle for Samuel Jackson to swear his way through a lazily written script whilst other people merely exist in the movie to fill up scenes he is not in? Lucky guess.

Shaft is a very confused movie. It's title character seems to be construed as an out of touch father routinely accusing his son of being "a metrosexual, heteronormative, cisgender – stop me when I tick your box!", telling him to stop working for 'the man', and having sent his son various inappropriate birthday presents during his time away from the family. However, never comes the time when Shaft sees the error of his ways and realises "Oh Shaft Jr, maybe it's time to move forward in life and stop living in a dated definition of masculinity and retire to be the father I never was". No, instead this film is about Shaft Jr learning to be more like his father and not be a 'pussy' anymore. Shaft is weirdly conservative and reminiscent of a bygone era in that regard. It almost makes sense for a reboot of a series of Blaxploitation films but even then who is this meant to be appealing to in this day and age?

Then comes the mixing with the old and new when Richard Roundtree shows up as Grandpappy Shaft. It's lazy and he's tacked on with no love or compassion. Usually a struggling father reconnecting with his own dad connotes a sort of peak in a character arc but nope; Shaft merely rocks up to his dads place, asks for guns, gets them and his Shaft Snr asks to come along on the raid with them.

I've written too much already but at least the music is good! Constantly fits the tone of scenes and even the parts it's awkwardly edited in are at least funny in that regard. Besides that, every memory of this movie will have left my brain the second I submit this review.

A Futile and Stupid Gesture