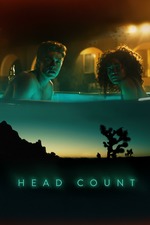 I was exhausted after the awkward first act, it might need a rewatch because the rest of the film grabbed me by my pajama bottoms and pulled me right in. I was critical of the exposition, the gigantic cast of 11, the setting, and even the curse. But I'll have a piece of humble pie for how the filmmakers were able to turn it into something unique, creepy, and fun for scares in the second act. I was disappointed with the ultimate demise of the film and with the way the creature eventually preyed on/ killed the unsuspecting characters or why? I must have missed it in the first act while I was rolling my eyes.