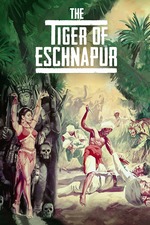 After his long and prolific Hollywood career, Fritz Lang (Metropolis) returned to Germany at the behest of producer Artur Brauner and embarked on an ambitious two-film project that would become known as his “Indian Epic.” The source material was the novel The Indian Tomb by Thea von Harbou (Lang’s ex-wife and former collaborator), a book Lang had initially been hired to direct as a silent film in 1921, before being fired and replaced by Joe May. In this, the first of the two films, Lang tells the story of a German architect (Paul Hubschmid) who arrives in India to build a temple for a Maharaja, whereupon he promptly falls in love with the Maharaja’s intended bride (Debra Paget), whom he narrowly saves from becoming the titular tiger’s latest meal. Impeccably directed on a modest budget, with a thrilling cliffhanger ending, Lang’s late-career triumph proves the old adage that the enemy of art is the absence of limitations.