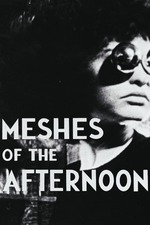 I truly wish I possessed the intellectual capacity to properly decode the enigma that is Meshes of the Afternoon; for now, however, I lack the ability. What I can pick up, however, is just what I truly appreciate from it, from both a technical level and a sensory perception.

In all its weirdness and vagueness, I can confidently hail this as a masterpiece of experimental cinema. Its surreal, ambiguous narrative and editing techniques are some of my favorite things about it, and several moments are eye-widening and jaw dropping. Not to mention that the final product itself, though often incomprehensible, is rather beautiful. It’s clear that Daran put a lot of thought into this film, on terms of production and also thematics.

Many of the images that are presented here are reminiscent of the women-centered melodramas and comedies of this time. Its clear that there is some sort of melodrama being put on stage here, though the editing and overall lack of conventional narrative makes the true “story” deliberately ambiguous. Though the visual motifs do point out some clues: mirrors are used in ways that both magnify and duplicate appearance, leading there to be multiple versions of our female “protagonist”. By the end, one of these duplicates has been murdered - but is this victim really a clone? And wouldn’t that technically make it suicide?

Therefore, while I do think there is a lot this film is trying to say in a short amount of time, it’s clear that Deren is attempting to muddle the pre-conceived notions of self-identity and perspective of the external. Many motifs point to a theme of sight and vision, and even the camera’s point-of-view seems consciously camera-like (most clearly seen in the moments where the stairs to her bedroom seem to swirl above her head).

Finally, I must point out the true mood-setter of the entire piece: the tantalizing score by Teiji Ito, who was Deren’s husband at the time. It’s not uncommon for me to get chills up my spine every time I watch this film, and I think the haunting Japanese-influenced soundtrack is vital to this; it truly wouldn’t be the same film without it.