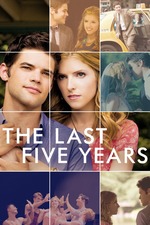 Love the conceit of this. Her perspective, moving in reverse, beginning with heartbreak – alternating with His, moving forward, beginning with romantic (and lustful) bliss. Then why did the structure mostly confound me?* It's my fault, right? I'll totally buy that. All I know is that it's not Anna Kendrick's fault.

Spent bulk of the running time marveling at her. Because she's Anna Kendrick, but also... the degree of difficulty for convincingly portraying any feelings other than total annoyance while acting opposite Jeremy Jordan is off the charts.

In fairness to Jordan though, how much blame does director LaGravenese and/or composer/playwright Brown get for making his Jamie so blandly unlikeable? On paper it's already only a two-character movie. On screen it might as well be a one-character movie.

Of course, hard to be bothered to care about anything that guy may or may not be going through after the opening scene. "Still Hurting" – and Kendrick's rendition of it – is achingly beautiful. So beautiful I wanted to pull a Sherlock Jr. and hand her a puppy. I actually thought, "I'm going to end up downloading this soundtrack, aren't I?" Then I heard the next number... and the next number... and the next... Not one other song comes close to matching the sophistication, eloquence and emotion of "Hurting." Several – all sung by Jordan; or should I say talk-sung? – are downright unlistenable.

I've seen a few snarky comments on here aimed at LaGravenese's direction, and I get it. There's plenty of head-scratching circling and handheld camerawork. But no appreciation for the staging of Jamie's infidelity number with his various girls on the side subtly replacing each other? Or the mirrored tracking shots – when Cathy emerges from her successful audition, full of ebullient actress joy, and later, begrudgingly bounding onto stage for yet another failed one? Everything about the construction of that doomed audition worked for me, and I'd argue there are more than a few graceful, well-choreographed moments here...

But that man, those songs.

* Wikipedia says this about the stage production: "The characters do not directly interact except for a wedding song in the middle as their timelines intersect." That sounds like it would have worked like gangbusters.

Maps to the Stars