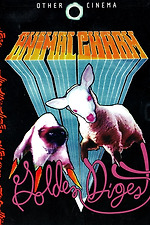 Though listed here and on Fandor as a film, Golden Digest, by video artists Animal Charm, is actually just an anthology of short pieces of video art played in chronological order, packaged together for a commercial DVD release by Other Cinema. As such, there's not a lot of rhyme or reason to the thematic overlap of each short, nor do they flow particularly well in the form of a feature.

That said, despite it being a mixed bunch of shorts, the ones that land are very bizarre and amusing, a proto-Everything is Terrible! and, in fact, proto-a whole lot of weird internet humour. One of the shorts, their more well known "Hot Mirror", turns what appears to be an advertisement for zen living into a corporate-product filled house tour, making it one of the best visual examples of Vaporwave I've yet come across. Another highlight is "Marbles", which sees camp classic Meatballs re-cut and reduced to a string of mundane events and cliches (and also no Bill Murray whatsoever).

What is surprising, and something I also noted in my piece about soda_jerk's Hollywood Burn, is how important and effective the sound mix is.

The story of a baby deer named Lightfoot is meshed with a rhythmically strange re-edit of Jim Bailey performing "Fever".

The pre-GIF GIF, paparazzi and attention explored through inane repetition.

One of Animal Charm's most well known shorts sees two monkeys stare each other off whilst another dances happily across the plains, only to be interrupted when entranced by a vision of a cartoon woman being tossed around by dolphins.

Similar vibes to Adult Swim's recent Unedited Footage of a Bear, the first quite long video morphs from the visions of a growth on a man's stomach to a look inside the life of a woman (not Ashley, though) stuck in an infomercial and relying on other informercials and commercials to become someone new.

Corporate training video (?) with its sound swapped out for an unsettling thriller score, transforming it into a very strange version of the first act in a '70s assassination film.

Hyper-enthusiastic commercial about family fitness hijacked by the scream of a lumbering uncle.

Vaporwave on film, an ever-expanding collection of attributes attached to this strange holiday house meshed with a classic Americana country score, then morphing into sanitised corporate music.

Repetitive computer painting and titlecards are a clever and simplistic set-up to an even simpler joke, and perhaps the funniest in the whole film, as children's educational videos are edited into nonsense.

Fairly simple montage of exercize that finds a glorious end in a clip of a man at a computer holding a hologram of his own head.

Through ghostly echoes turns footage of a crane operator testing the functions of his wares into a very unique waltz.

Police training and preparation to investigate widespread breastfeeding. Idea is there, execution isn't.

Mostly nonsensical compendium of cultural cliches (the French are the targets) that then about turns to be a statement on consumption in tourism, briefly paying tribute to their earlier Working Together

An oddly potent look at life flashing before one's eyes, told through a series of snapshots cribbed from lifestyle magazines and commercials.

Tapping into the dreams of a bulldog. Delightful, if only we saw more of the dog's idyllic visions of ballet.

Genuinely stumped by this one. Ostensibly about the media polluting positive news with disaster, I think?

Tries its best to de-sexualise a clearly sexually charged advertisement for an arcade game. Does a pretty amusing job.

Animal Charm try their hand at original compositions, with a lyrically literatist track about having to move houses cut to a montage of, well, people moving houses. Gets terrifying somewhere in the middle, as animation slowly takes over, but definitely bogged down by the song.

Essentially just Mark Roth: Redux - same general idea, marrying generic footage to an ominous score, but here there's a touch more semblence of a plot in editing and also it ends on a guy moving through a car park on an office chair with a sinister soundtrack, which is hilarious.

Cut up to look like either the opening credits for a veterenarian's hospital show or a looping cycle of tense flashbacks, this short quickly shifts gears and undercuts the actual procedure of a vet by having a man seemingly insert a cotton swab into a cat's ear and then his nose. An improvement on the similar Pet Programming.

Pretty strange yet likely successful overt and liminal advertising for Hollywood and California as paradise. The fact that it only really uses 6 images to achieve this is to its credit.

I don't even think this is one of their works, but just something bizarre they found on VHS, but it is nonetheless very amusing in this re-purposed context.

Different benign workplace injuries, same three actors. The universe conspiring against them no matter what they do. Amazing.

There's a few shots of animals being controlled by a remote, which then cuts to a scalpel scratching the surface of glass, before moving to behind the scenes photos of Animal Charm's work stations. I have no idea whether this is a short or just a compendium of lost ideas.