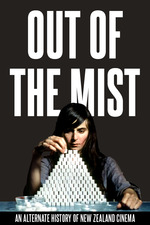 Out of the Mist: An Alternate History of…

Tim Wong, editor-in-chief of long-running New Zealand arts review and film journal The Lumière Reader, has made his first foray into feature filmmaking with, perhaps fittingly, an essay film. Very much in the vein of Thom Andersen’s Los Angeles Plays Itself and some of the work of Mark Cousins, Wong’s Out of the Mist cycles through engaging and eclectic film clips, pulling from feature fiction and documentary, shorts and a wealth of experimental cinema to posit an alternate canon in New Zealand film history. Rather than dwell too often on the negative impacts of the Lord of the Rings series being the most mainstream influence on the image of New Zealand in popular culture, instead Wong and Catton walk us through the way in which early colonialist art and photography hampered any accurate depictions of the culture or landscape of the country and how this had a trickle down effect on the national cinema.